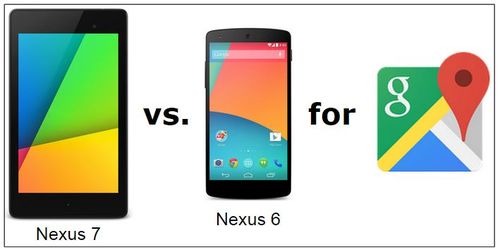 Here is a Screen Shot #1 comparison (click on image for bigger resolution): 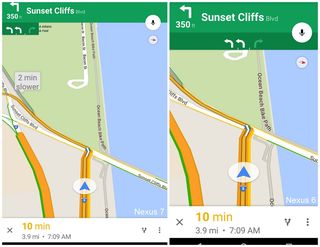 And here is Screen Shot #2 comparison (click on image for bigger resolution): 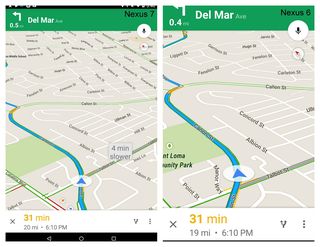 It appears that since the Nexus 7 (left images) is a tablet and has more screen real estate then the smartphone Nexus 6 (right images) you get the alternative route time notifications as you are driving your selected route in Google Maps.

These notifications are actually a great feature, and I use it all the time for making real time route changes.

If anyone knows if there is actually a way to enable this on the Nexus 6 then please let me know.

NOTE: I did load up Waze on the Nexus 6 to see if that application had the route time notifications but from what I could tell it doesn't.

The main reasons I think this new version (2013) in the base model configuration (WIFI only with 16-GBs)  is a big improvement over the last base model version (2012):

That being said, one of the reasons that it took me more than six weeks (I'm writing this on 9/2/2013) to feel comfortable recommending this version was that the GPS interface had a bad hardware bug that made it pretty much useless for navigation.  Since this is a critical feature for me I wanted to make sure there was a fix (released late in August) that addressed the problem. The fixes to v4.3 list below from Google did solve my issues.  These fixes were also suppose to fix some touch screen issues but I never had those.

The one thing that I'm still not 100% happy about is that the camera on the back for "standard pictures" (5-MB) is not that great except in ideal lighting situations.  But that is pretty much my only complaint.

So, with all things considered, I do recommend the Google Nexus 7 (2013) tablet if you are in the market for a 7" tablet.  I use it everyday effectively for: email; personal productivity; social media; consuming media (news, podcasts, blogs, RSS, video, etc); navigation; games; and tracking stuff (notes, references, health, etc).

UPDATE (11/24/2013): Now that there is a 2nd generation Apple iPad Mini with Retina display I did consider purchasing it, but decided that since I use the GPS everyday for navigation that I'm staying with the Google Nexus 7 (2013).  Plus the price difference is something to consider.  There are rumors that the 2013 edition will get a new list price of $199 which will mean there is a $100 price difference.

As a long time Google Reader user I am not very happy with the recent news that Google will be shutting down the service on July 1, 2013.

I just finished reading some of the latest coverage, analayis, and recommendations at:

At this point I don't have a good solution recommendation for myself or others that like what they have currently in Google Reader.  I'll be check options out over the next month or so.  I don't have a huge sense of urgency as there is still time to make a discriminating decision.

Things I liked about Google Reader:

If you have a good recommendation then please let me know.

I've noticed recently that since I carry my iPad around with me everywhere that I've been getting a lot more questions from people I know and meet about what type of tablet they should get.  While I follow the mobile market as close as possible, all my current experiences are with an iPad.

I am a huge fan of the iPad for me (see previous posts), but recently I've been really curious if all the buzz around the Nexus 7 and the latest Andriod OS 4.1.2 and future 4.2 (Jelly Bean) were true.

Related to this topic, is my ongoing evaluation of Windows 8 on a touch screen enabled HP laptop, the release of Microsoft Surface/Windows RT (no experience), and the new Apple iPad Mini (no experience).

So, I decided to expand my experiences and look for a used Google Nexus 7.  I was able to pick one up locally here in San Diego for $150 (25% off list) so that sealed the deal.

So here is my first impression after opening the box.  Nice hardware -- the rubber back feels great in my hands, and the smaller form factor (~7-inch) is excellent. To be honest it really brings back memories of the Apple Newton.  In fact, one of the cases I had for my Apple Newton, that I was using for my Marantz recorder, easily holds the Nexus 7, so that is my case at the moment.

After using the device pretty much full time this past weekend, the current Andriod OS (4.1.2) is suprisingly easy to use, and I haven't found too many issues or problems I couldn't solve on the device.  It is defintiely more technical than Apple iOS, but that shouldn't cause any real issues, even for a novice.  The comments from others in the mobile analysis arena that there is now parity between this version of Andriod and iOS. I think this is a pretty accurate assessment from my short testing.

I find the integration with Google very tight, and if you are a heavy Google user (Gmail, Docs, Reader, Maps, Play, etc) than the Nexus 7 is an excellent tablet.  The new Google Now is a very good tool that floats up information that is pretty meaningful to me (weather, calendar items, sports scores, traffic, etc).  I also think the Widgets on the home/main screen are very power for getting quick updates to key information.

Some things that are working against me with the Nexus 7: no rear-facing camera (I use my iPad camera daily); trying to not purchase any software that I've already paid for iOS; screen seems to get dirtier than the new iPad (about has bad as the original iPad); and missing some core applications that I have on iOS (some games, native Toodledo app, iThoughtsHD, etc).

Some useful Nexus 7 features: integrated GPS and NFS; micro USB charger; Google Wallet; integrated speaker is similar to the iPad (maybe not as loud but good enough); and software buttons on the front for back, home screen, and running applications (ie. scrolling app switcher).

While I had some application gaps, there was a relatively high parity in standard applications that I use regularly on iOS: Amazon shopping, Bible, Camera+ alternatives, Drive, Evernote, Hulu Plus, LastPass, Dropbox, Netflix, PocketBible (alpha), RedBox, and Stitcher.  It is also good to know that there are really two main application stores: one from Google (Play) and one from Amazon (AppStore).  I recommend checking both to see if there is a possible deal between the two.

That would also include trying out the iPad Mini.  And I think another option is one tablet for home (aka the iPad) and one for being out-and-about (the Nexus).