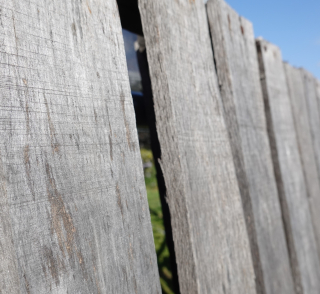 Basically all is well with us since the last update. Everyone is healthy. Maximum telework. Virtual school. Social distancing. Major home bodies with home projects in full swing. And a good amount of Dungeons and Dragons (D&D) as an escape vice binge watching shows.

I am enjoying my two mornings a week (Tue & Thu) riding this bike trainer while watching YouTube cycling videos using this iPad stand, and listening to audio books. I am almost done re-listening to all the Mark Greaney's Gray Man Series books.

One thing I really miss is swimming at the YMCA.  I have been tempted to put on my tri-wetsuit to swim mini-laps in our pool, but I haven't pulled the trigger. They just opened up the beaches and ocean in San Diego this weekend so maybe a swim in the ocean is going to happen sooner than later.

I have been listening to a lot more music recently.  Here are some suggestions from YouTube:

"There's more than one way to look at a problem, and they may all be right." - Norman Schwarzkopf

The main reasons I think this new version (2013) in the base model configuration (WIFI only with 16-GBs)  is a big improvement over the last base model version (2012):

That being said, one of the reasons that it took me more than six weeks (I'm writing this on 9/2/2013) to feel comfortable recommending this version was that the GPS interface had a bad hardware bug that made it pretty much useless for navigation.  Since this is a critical feature for me I wanted to make sure there was a fix (released late in August) that addressed the problem. The fixes to v4.3 list below from Google did solve my issues.  These fixes were also suppose to fix some touch screen issues but I never had those.

The one thing that I'm still not 100% happy about is that the camera on the back for "standard pictures" (5-MB) is not that great except in ideal lighting situations.  But that is pretty much my only complaint.

So, with all things considered, I do recommend the Google Nexus 7 (2013) tablet if you are in the market for a 7" tablet.  I use it everyday effectively for: email; personal productivity; social media; consuming media (news, podcasts, blogs, RSS, video, etc); navigation; games; and tracking stuff (notes, references, health, etc).

UPDATE (11/24/2013): Now that there is a 2nd generation Apple iPad Mini with Retina display I did consider purchasing it, but decided that since I use the GPS everyday for navigation that I'm staying with the Google Nexus 7 (2013).  Plus the price difference is something to consider.  There are rumors that the 2013 edition will get a new list price of $199 which will mean there is a $100 price difference.

As a long time Google Reader user I am not very happy with the recent news that Google will be shutting down the service on July 1, 2013.

I just finished reading some of the latest coverage, analayis, and recommendations at:

At this point I don't have a good solution recommendation for myself or others that like what they have currently in Google Reader.  I'll be check options out over the next month or so.  I don't have a huge sense of urgency as there is still time to make a discriminating decision.

Things I liked about Google Reader:

If you have a good recommendation then please let me know.

I've noticed recently that since I carry my iPad around with me everywhere that I've been getting a lot more questions from people I know and meet about what type of tablet they should get.  While I follow the mobile market as close as possible, all my current experiences are with an iPad.

I am a huge fan of the iPad for me (see previous posts), but recently I've been really curious if all the buzz around the Nexus 7 and the latest Andriod OS 4.1.2 and future 4.2 (Jelly Bean) were true.

Related to this topic, is my ongoing evaluation of Windows 8 on a touch screen enabled HP laptop, the release of Microsoft Surface/Windows RT (no experience), and the new Apple iPad Mini (no experience).

So, I decided to expand my experiences and look for a used Google Nexus 7.  I was able to pick one up locally here in San Diego for $150 (25% off list) so that sealed the deal.

So here is my first impression after opening the box.  Nice hardware -- the rubber back feels great in my hands, and the smaller form factor (~7-inch) is excellent. To be honest it really brings back memories of the Apple Newton.  In fact, one of the cases I had for my Apple Newton, that I was using for my Marantz recorder, easily holds the Nexus 7, so that is my case at the moment.

After using the device pretty much full time this past weekend, the current Andriod OS (4.1.2) is suprisingly easy to use, and I haven't found too many issues or problems I couldn't solve on the device.  It is defintiely more technical than Apple iOS, but that shouldn't cause any real issues, even for a novice.  The comments from others in the mobile analysis arena that there is now parity between this version of Andriod and iOS. I think this is a pretty accurate assessment from my short testing.

I find the integration with Google very tight, and if you are a heavy Google user (Gmail, Docs, Reader, Maps, Play, etc) than the Nexus 7 is an excellent tablet.  The new Google Now is a very good tool that floats up information that is pretty meaningful to me (weather, calendar items, sports scores, traffic, etc).  I also think the Widgets on the home/main screen are very power for getting quick updates to key information.

Some things that are working against me with the Nexus 7: no rear-facing camera (I use my iPad camera daily); trying to not purchase any software that I've already paid for iOS; screen seems to get dirtier than the new iPad (about has bad as the original iPad); and missing some core applications that I have on iOS (some games, native Toodledo app, iThoughtsHD, etc).

Some useful Nexus 7 features: integrated GPS and NFS; micro USB charger; Google Wallet; integrated speaker is similar to the iPad (maybe not as loud but good enough); and software buttons on the front for back, home screen, and running applications (ie. scrolling app switcher).

While I had some application gaps, there was a relatively high parity in standard applications that I use regularly on iOS: Amazon shopping, Bible, Camera+ alternatives, Drive, Evernote, Hulu Plus, LastPass, Dropbox, Netflix, PocketBible (alpha), RedBox, and Stitcher.  It is also good to know that there are really two main application stores: one from Google (Play) and one from Amazon (AppStore).  I recommend checking both to see if there is a possible deal between the two.

That would also include trying out the iPad Mini.  And I think another option is one tablet for home (aka the iPad) and one for being out-and-about (the Nexus).

"New" Things I Did Turn On Apple iOS 6

I was able to successfully upgrade to Apple iOS 6 (Apple's What's New Page) on my iPad without any issues.  Here are the "new" things I enabled:

I also had no problems updating Conrad's iPad 2.  Conrad is very happy with the new iOS 6, but when I asked him what specifically made him happy he wasn't able to pin any one thing down. ;-)

I am kinda bummed that Passbook isn't for the iPad yet. And the Panorama feature for the Camera that is in the iPhone/iPod isn't available on the iPad.

I am reading through the following articles before doing the Apple iPad iOS 6:

Are there other recommended reads?  Anyone have any issues?

As a "new" iPad owner, one of issues outlined as a possible negative impact of having a Retina display was that application memory storage was going to be much bigger.  Since my plan was to move from iPad 2 with 16-GB to the new iPad with 16-GB, I was a little concerned since I seemed to have between 500-MBs to 1-GB free.

So, after a couple of recent updates where I noticed "Retina display' updates listed in the new feature list, I decided to try and track file sizes as updates were happening.  Here is the first sample of applications updated: 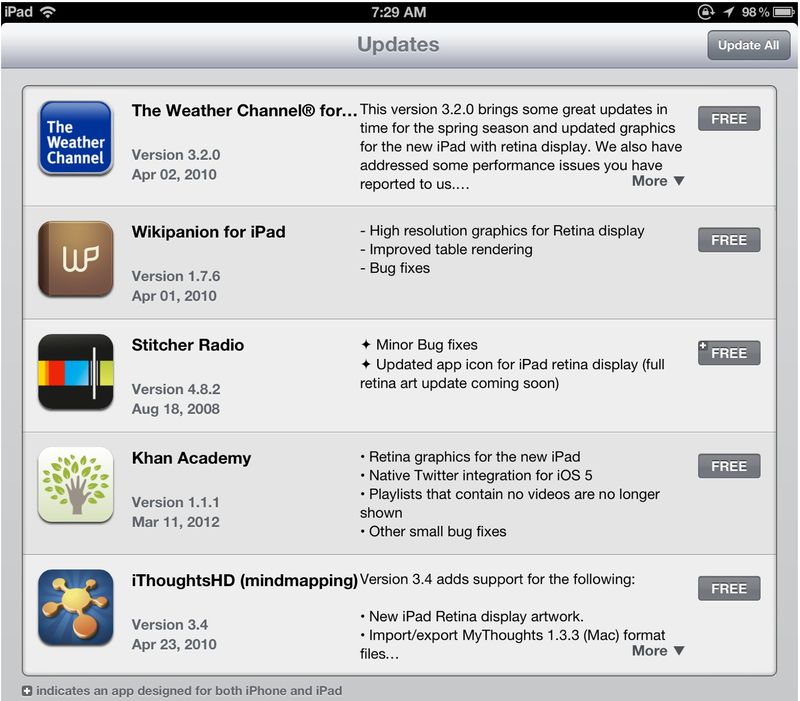 And this is the summary of increases for these apps:

My second sampling included (less than a week ago): 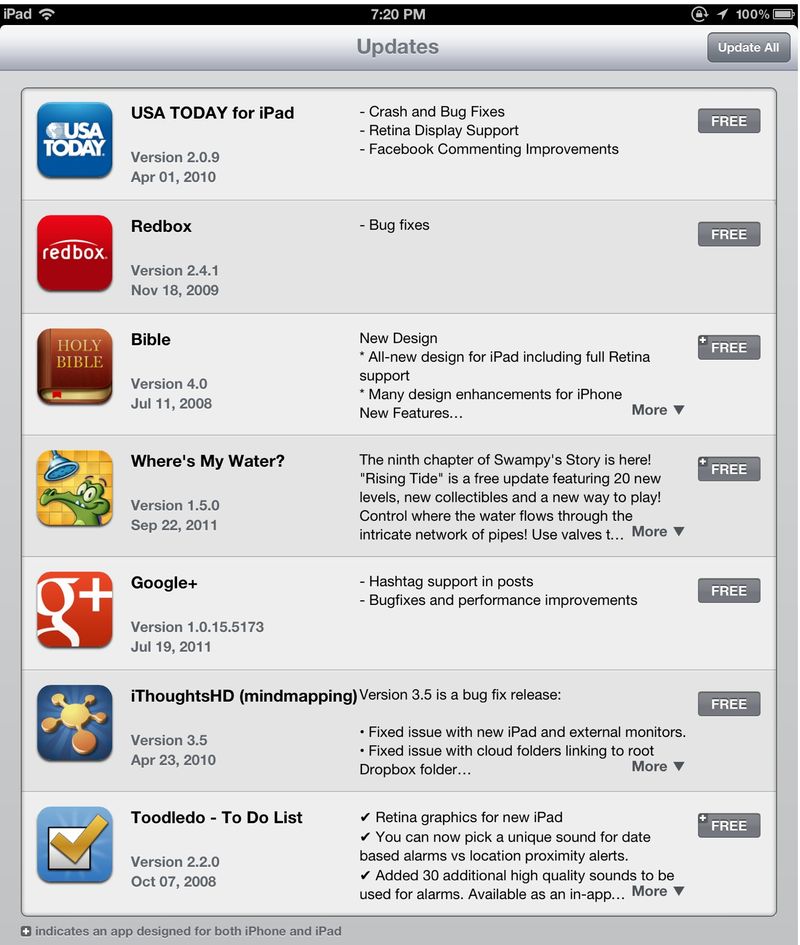 With the following analysis:

So, it does appears that in general 'new' iPad applications are larger, and based on my sampling it looks like about 1.5x larger on average.  Most of the applications I tracked are all new Retina-savvy applications, but they also have other upgraded capabilities, new features, fixes, etc.  As the saying goes "correlation does not mean causation."

It was interesting that the iThoughtsHD most recent update went down in size (but did increase when it added "Retina display" feature).  Also the Google+ application is not Retina-savvy  per the application notes but it did have a small increase between versions.

The impact to my own iPad seems relatively minor since I seem to have between one to two GBs free (mostly changing based on music or video uploads) since moving from iPad 2 to new iPad.  I'll keep monitoring and will do an update post if something significant turns up.

There are a lot of reviews on the new 3rd generation iPad.  Here are some of my thoughts after 48+ hours of use:

A couple of other things to mention:

I noticed this morning in the Sunday Union-Tribune (5/1/2011) what seemed to me to be an increased number of  tablet and ebook advertisements:

I do think both the Kindle and the Nook are great ebook readers based on what I've heard from others about them.  I am still very happy with the new Apple iPad 2, so I don't think I'd seriously consider any of the other tablets at this time.  And since I like my iPad 2 for reading books, adding an ebook reader to my technology toolkit probably won't happen.

My usuage pattern for the iPad 2 are still pretty much the same since I purchase the original iPad: ebooks/PDF reading, email, web browsing, personal GTD, casual gaming, and consuming podcasts/music/video.

Will The Motorola Zoom Replace My Apple iPad?

I got a question from a friend asking if I was considering replacing my Apple iPad with a Motorola Zoom now that Best Buy is running ads for them.

The short answer is no.  I am still very happy with my iPad and use it every day as my primary personal "knowledge navigator."

After reviewing the Best Buy ad (the Zoom is expected to be released Feb. 24), I think the things that are attractive about this device:

Some things that are big negatives for me:

The other thing that is going to be hard for iPad users who are comfortable with using iTunes as their primary media sync tool (podcasts, music, movies, etc) is finding that same experience in the Android/Zoom eccosystem.  There are some good alternatives like doubletwist, but they are different.

The other big negative is going to be people's investment in iPad applications.  I know that is going to be something I'd have to consider because I do have some key applications I've purchased and use everyday that paying for them over again isn't very appealing.