Two Weeks Into Moving To Obsidian As My GTD System 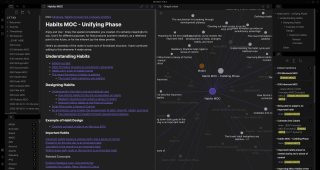 About two weeks ago I decided to move my personal David Allen's Getting Things Done (GTD) system (aka "External Brain/Trusted System") to Obsidian.md (a "free" personal knowledge management application -- note I previously thought that Obsidian was open-source but it is not).

I don't have a huge set of reasons for the switch, it just seemed like something I was very interested in doing after testing Obsidian over the last 6 months for writing, note-taking, organizing, etc.

My work GTD system is Microsoft Outlook based with all my References in Microsoft OneNote or in the Windows filesystem.

My first step was to relieve my concern about being able to work across all devices.  So, my first three next-actions were:

This was pretty straightforward and was probably working seamlessly in less than 10 minutes.

Then I had to figure out how to get things to work on my Android Phone and Apple iPad:

Now that I could trust that data would be synchronized, and available no matter which device I was using, I just started learning more about what other people have done:

The current setup is pretty minimal after migrating my current Tasks and Projects from Nirvana, and my current active Notes (Project Support, References) in Google Keep.

Future Projects To Work On

I have used this tool -- keep-it-markdown 0.4.3 -- to migrate all my notes out of Google Keep into .md files to Google Drive. However, I still need to import those into Obsidian.

I also need to migrate a couple of lists in Nirvana -- Later & Someday/Maybe -- to Obsidian.

There is also an effort to figure out if there are other Obsidian plugins, themes, or templates I should be using.

Thanks for this. Found your blog via an exploration of the continuous calendar idea from Kairos Cognition. My organizational structure has been largely inlfluenced by the following article, which you may already have heard of. It was clearly enough written for me to follow, and as a consequence, I ended up learning to use Sublime Text, an advanced text editor not unlike Obsidian: https://plaintext-productivity.net/ . Since Obsidian has come out, I've dabbled in it, and it being built with linked notes in mind is intriguing, but I'm so habituated to Sublime Text and my set up that it's going to take a bit more for me to move. Sublime has some old packages that allow for linked notes, but the one that works for me only works for items within the same folder as the one being worked in. In any case there's some good thinking/tips in the linked article. Thanks for sharing yours.