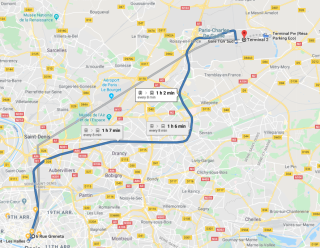 MORE DETAILS -- The trip from our hotel in Paris (Hôtel de Roubaix) to Charles de Gaulle airport was a straight forward train/metro ride (RER B).  It took less than an hour and wasn't very crowded.

For some reason even though this was a "BIG" day I only have four photos documenting this part of the trip.

Carson made it through security and then customs on her own in Paris, but it took much longer than we had anticipated. She was successful in flying home on United from Paris to Washington, DC (IAD), and then on to San Diego.

Once Carson was airborne we made our way to a smaller terminal to fly down to Rome via Vueling Airlines that was booked via CheapOAir.

While we were waiting for our flight to Rome we found a store called Spencer, and as we were leaving we could see a Concorde airplane display from our seats on our plane.

The trip down was uneventful and we got to Rome without any issues. Our Airbnb host reserved us a driver who was waiting for us and we made our way to our Airbnb in Rome pretty efficiently.  After checking-in to a wonderful location we managed to do some city exploring and get dinner before bed (see next post).

Collection of all the photos of the day.