When we arrived in Paris (Saturday, June 15th) it was still late mid-day (trip summary). We ended up dropping off our stuff at our hotel (Hôtel de Roubaix) and then started walking toward the Seine . We ultimately made our way to the Effiel Tower.  We took a tone of photos.

Here is our collection of photos from the Effiel Tower.

We ended the day eating at Hall S Beer Tavern (pictures) for dinner. We were super hungry, the food was excellent, service was pretty good, and sitting down for an hour or so was much needed.

The next day we headed to the Louvre for a guided tour (highly recommended), and then we had time to walk and see what we wanted.  We did that for about 2 hours. Once we were done at the Louvre (most of the morning) we made our way to the Arc de Triomphe, and Norte Dame.

We had lunch at L'Etoile 1903 near Arc de Triomphe.  The only picture I took was of the beer (I think we were super hungry and just started digging in before a picture could be taken of our food): 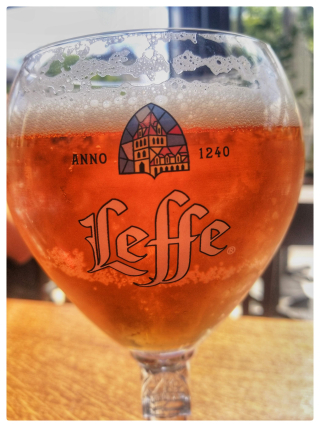 The food was good at L'Etoile 1903 and I would recommend eating there again.

After we were finished for the day we ended up eating dinner at Cafe March (photos). We all liked our food and the atmosphere was good. I'd eat there again.

Just before dinner though, I was able to meet up with Rolf Potts (travel writer) for a quick picture. He was in Paris at the same time teaching a class on writing.  I've been listening to Rolf's podcast for some time -- Deviate.  Some of his podcasts actually inspired parts of this trip. 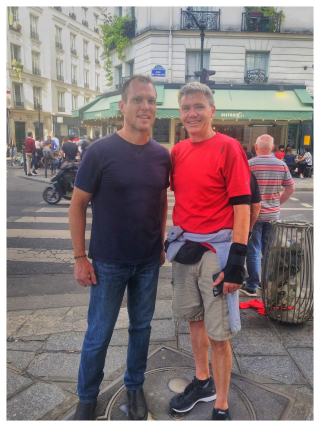 Other pictures from Paris can be found here.

Some other details and thoughts about Paris: