Getting Back To Healthy I went a little backwards on my back injury (bulged disc), and issues with my left leg (sciatica) since the last post in February.  The week before my last sprint triathlon I hurt my back trying to lift something that I shouldn't have. I took the next 6 days off, and then I did the UCSD Triton Sprint Triathlon (actually it was Dual-atholon -- 1.5km run, 21-km bike, & 5-km run -- as they had to cancel the swim because of rain run-off health concerns).  The bad news is that I fell off my bike in transition and hurt my knee, hip, elbow, and hands.  I was able to push through it during race day, but by the following day I couldn't run at all.  So, I've pretty much taken the full month off from running, and did a treatment of steroids to get me back to how I felt back in late October (run 60 seconds, walk 30 seconds, repeat 28x times).  Thank goodness for a good stretching routine, walking in the morning (instead of running), Pilates (2 days a week), and swimming (3 days a week) during this non-running time.  Hopefully April will be a month of full run recovery, and then maybe another sprint triathlon early in May.

A bunch of stuff has been going on that has been really cool:

I have tried several waterproof headphones for listening to music while swimming. These are the best so far: Underwater Audio's HydroActive Short-Cord Waterproof Headphones.

Since Apple started supporting podcasts in iTunes, I've always used some sort of Apple iPod for my own listening. In my quest to simplify my life, I decided to retire the Apple iPod Touch I've been using the last couple of years with my Android phone. This decision was basically about having one less device to care and feed.  After testing several Android application options, I finally made the switch to using Podcast Addict for Android. (Support) So far, so good!

Here is a collage of recent bourbons** that I've tried since January (last post on the topic): 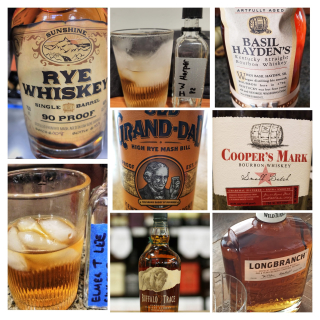 ** Another bourbon that I've tried that I didn't take a picture of yet is Woodford Reserve Double Oaked. It is by far my overall favorite bourbon. #1.

I made a collection of photos of recent craft beers that I've tried over the 1st Quarter of 2019. All of them were good and recommended.

There is a lot going on in April:

"Yesterday's the past, tomorrow's the future, but today is a gift. That's why it's called the present." - Bill Keane