I recently purchased a Compact Flash (CF) adapter that holds an SD card.  The one I got was: SD-CF II: SD to CF Type II Adapter (Supports SDHC MMC) from Amazon for under $20.

The reason I got this was to reduce some drag that was holding me back from taking my camera when I went out over the last couple of months.  Before the adapter, I had a standard CF Type II card that worked great, but I had created a work flow issue when I moved to my current workspace location at home.

Moving to the new space gave me an opportunity to set up my computer with no USB hub, card readers, etc. (ie. much cleaner and less cluttered).  However, now to get pictures off the camera I had to get out the adapter and hook up several USB cables.  Ugh.

But then I realized my main system has a built-in SD card slot so the adapter streamlines getting the pictures to my computer.  Pop the card out of the camera, take out the SD card, and then put it in my computer for upload.  Simple.  Less drag.

Here is a picture (also on Flickr in a larger format) that I wouldn't have taken without this tweak: 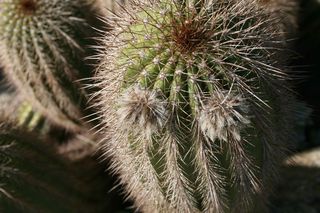 Anyone else have any other tweaks or gear recommendations that have reduced drags in their systems?  Let me know if you do!